On Thursday 8th November, East Hampshire District Council (EHDC) and Community First celebrated the contributions of local volunteers at the East Hampshire Volunteer Awards in the Old Thorns Hotel near Liphook. Volunteers were recognised for their unwavering commitment to service, their above and beyond efforts to support their organisation, and their positive influence through engaging their peers.

150 attendees, including nominated volunteers and their guests, were welcomed to the hotel’s Gatsby Ballroom by the music of the Alton College Jazz Band. Pradip Tran, a pupil at the Petersfield School and accomplished solo violinist, entertained the audience with a sublime musical interlude. Local groups Charity Walk for Peace and Home Start Butser also spoke in between award presentations to raise awareness of their work. Tim Houghton, CEO of Community First, and Sandy Hopkins, Chief Executive of EHDC, gave speeches to thank all the volunteers and to encourage everyone to spread the word about volunteering and its value to our communities.

Janet Duggan, Volunteer Service Manager and Compere for the awards, said “we would like to congratulate the award winners who represent all the volunteers who work tirelessly across East Hampshire.  It was so inspiring to hear about the contribution each volunteer makes to local organisations”. 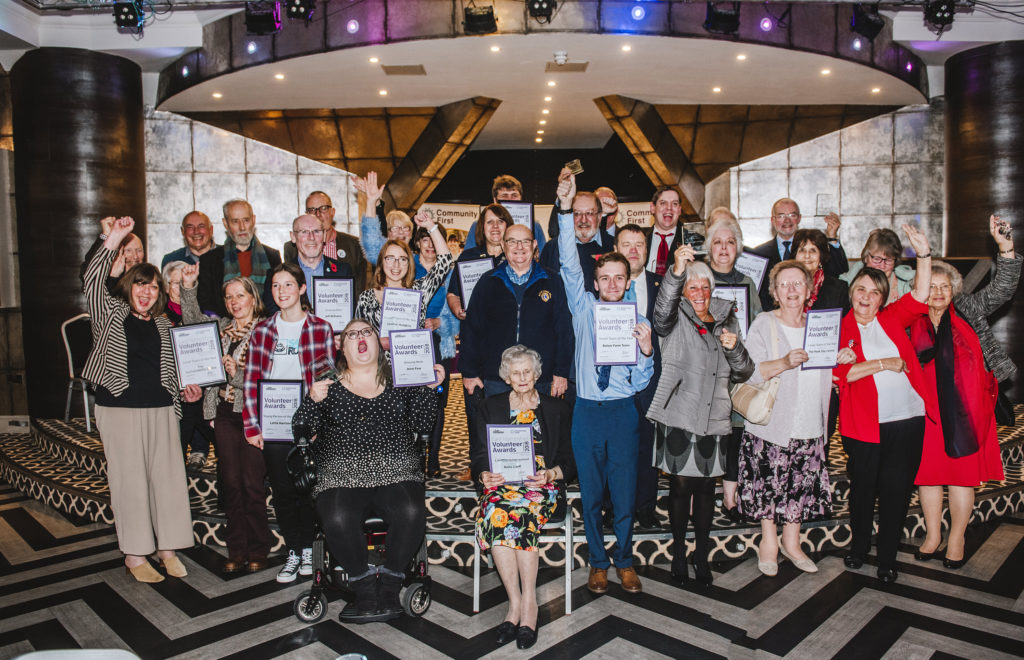 The award ceremony started with the Young Person of the Year category, presented by EHDC’s Chief Executive, Sandy Hopkins. The Third Place winner was Joe Maunder for his commitment to youth group volunteering at The Kings Arms in Petersfield. Lottie Harrison, 14, won Second Place for her volunteering work supporting junior cricket in Ropley. Caroline Hodgkiss, 17, was the first winner to receive First Place for the evening. Alton Young Lions Leaders nominated Caroline for her dedication to student volunteering and peer engagement.

Tim Houghton, CEO of Community First, presented the Unsung Hero Award. Jeff Williams won Third Place for his hard work managing Dementia Friendly Petersfield and record fundraising for the Poppy Appeal. The Second Place award went to Curtis Bone, for his commitment to supporting local events and activities through the Whitehill & Bordon Town Partnership. The First Place winner was Jenni Few, who has combined music with community action over the last four years through her volunteering with Radian Group, Embrace Change, and Music Fusion.

Councillor Julie Butler, Deputy Head of EHDC, presented Small Team of the Year Award. Third place went to the Petersfield Citizens Advice Supervisor Team for their past 16 years of support to the organisation and the local community. The Second Place winners were Winton House Centre Voluntary Gardening Group in Petersfield. The First Place award winning team was the dedicated Wednesday volunteering team at Butser Ancient Farm in Chalton.

Beverley Jones, Chair of the Community First Board of Directors, presented large Team of the Year Award. Alton Lions won Third Place for their incredible work organising fundraising events to support local services. Second Place went to the volunteer team at The Sustainability Centre in East Meon, who have helped raise nearly £2 million for the centre. The First Place winner was the team at the Peak Day Centre in Liphook for the compassion and care they provide to older and more vulnerable members of the community.

Special Commendations were presented by Councillor Anthony Williams, Chairman of EHDC. Third place went to Val Bywater for her dedication to improving facilities at Whitehill Village Hall and running the ‘Wednesday at Whitehill’ programme. Teresa Brown won second place for bringing the community together during her time as chair for Privett Village Hall. John Bannell won the First Place Special Commendation Award for his tireless work on Clanfield Parish Council ensuring the best outcomes for the community.

The Lifetime Achievement Award was presented by Councillor Richard Millard, the leader of EHDC. Third Place award went to Lieutenant Colonel Jamie Jack, who has only just stepped down as Chairman of the Bramshott and Liphook Poppy Appeal at the age of 91. Tom Yendell won Second Place for his contributions to youth and arts projects through Four Marks & Medstead Rotary. However, there were so many incredible Lifetime Achievements that two people received joint First Place. Jim Dickinson, the tree warden for Alton for over 25 years, was awarded for his hard work promoting the importance of trees in Alton and Hampshire. Anita Clark was awarded for her dedication to fundraising £400,000 for Emmaus Hampshire and raising awareness of homelessness in Hampshire.

Find links to the award winners videos at https://www.easthants.gov.uk/news/east-hampshire%E2%80%99s-volunteers-rightfully-recognised-awards-ceremony.  You can also find out how to start volunteering in Hampshire or recruit volunteers for your organisation through Volunteer Wessex.