Home | News | Find out the latest on the Whitehill & Bordon Regeneration

Find out the latest on the Whitehill & Bordon Regeneration

Whitehill & Bordon charities and community groups will be able to pose 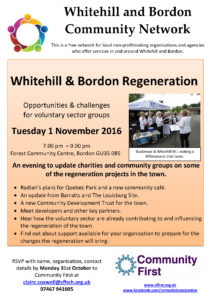 questions to some of the developers involved with the regeneration of the town on Tuesday 1st November at Forest Community Centre, Bordon GU35 0BS from 7.00 – 9.00 pm.

The event which is being organised by the charity Community First, is part of a programme of meetings of The Whitehill & Bordon Community Network which aims to help local non-profitmaking organisations get to know each other and work in partnership for the benefit of local residents.

During the event, Barratts, the developer for the Louisburg site, will give a presentation and Rob Allerston, from The Phoenix Theatre & Arts Centre will speak to the audience about his experience of managing a charity which is based right in the centre of the Louisburg site.

Radian, the developer for the Quebec Park site, will also talk with particular reference to a new community café which is planned there. The Deadwater Valley Trust, a charity who manage the Bordon Inclosure woodland directly behind the Quebec Park site, will describe their involvement with introducing this piece of land to the local community and the challenges and benefits for the charity in supporting the regeneration of the town in this way.

“Community First organised a similar event for the voluntary sector earlier in the year,” said Claire Coxwell, Community Development Worker for the charity. “Many suggestions were put forward and ideas shared.  Part of the meeting next week will be spent looking at the progress on these discussions.”

Tim Houghton, Chief Executive of Community First, will also give a brief introduction to the proposed Whitehill & Bordon Community Development Trust.  There will be representatives from EHDC, Whitehill & Bordon Regeneration Company, Whitehill Town Council and members of X-Change – a group which – amongst other things –  aims to make it easier for organisations and individuals to find out about what is going on with the regeneration. There will also be some time for questions and suggestions.

“The voluntary sector and other non-profit making organisations are such an important part of the existing town and are already playing a vital role in bringing a sense of community to the new developments in Whitehill & Bordon.” said Claire Coxwell.

Any volunteers or paid staff from non-profitmaking organisations wanting to attend the event should call Claire Coxwell on 07467 941003 (voicemail available) or e-mail claire.coxwell@cfirst.org.uk