Community First has been both amazed and humbled by the number of volunteers who have come forward to help their communities in these most extraordinary of times. Whilst many volunteers have been helping to tackle the daily practicalities of life, such as shopping, collecting medicine and dog walking, other volunteers have been working equally hard on helping people to maintain good emotional and mental health.

The parishes of Hale and Woodgreen approached the Volunteer Centre at Community First in the New Forest for help coming up with ideas that could unite and support the whole community. Primarily, this was tackling a growing sense of isolation (especially for older residents) by planning an activity that would be open to all ages and abilities. The idea was something that people could get involved in without the internet or any special tools, a project to make people smile and improve contact with the community in a safe way. Enter the scarecrows!

The Volunteer Centre coordinator worked with Hale and Woodgreen to develop the idea of a Community Scarecrow Competition. Villagers were encouraged to build or draw scarecrows, big or small, and display them in gardens or windows. People out walking on their daily exercise could then spot these creations and talk to (or wave) at the creators in a socially distanced way. Local people circulated photographs on village notice boards and social media. In short, the idea took off! The villages decided the theme for the scarecrows would be ‘Key workers’ in honour of the army of staff helping during the crisis. The competition, with a nod to the isolation, was titled ‘Behind the Hedge’.

A few weeks later, if you were to walk through Hale or Woodgreen, an extraordinary sight would greet you: dozens of colourful, creative and downright inspired scarecrows all perched in hedges, up trees, in gardens or sitting on bicycles! 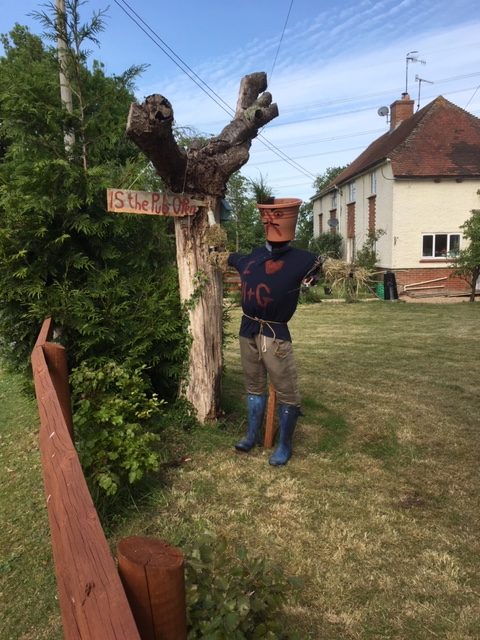 There are now over 56 scarecrows in total according to Rob Hutchinson, one of the organisers and COVID-19 Community Response Coordinator. With the entries still climbing and many of them from children, Rob said the competition had “produced a lot of fun and laughter” in the villages. The Rev Nicky Davies from Hale, also involved in the volunteer response, commented that “it has given a lot of enjoyment”. The idea so thoroughly caught the public imagination that it has appeared in a recent Saturday edition of the Telegraph as well as in local publications and radio. Most importantly, the scarecrows achieved their aim of bringing a community together by providing a focus for fun, activity and safe interaction at a time when residents needed it the most. You can view more of the amazing scarecrows of Hale and Woodgreen on the parish website.

Whether they are helping local shielded people as a direct response to the crisis, offering a listening ear to people coping with grief or isolation, or bringing communities together under unprecedented circumstances – the role of volunteers in the response to COVID-19 cannot be overstated. 1st – 7th June 2020 marks the annual Volunteers’ Week. Community First, along with other Community and Voluntary Services organisations across the country, are inviting people to show their appreciation through applause. #ClapForVolunteers will take place on Monday 1st June at 8pm, with people taking to their doorstep to make some noise for the unpaid heroes who support their communities and keep many essential services going. Anyone who is looking for a way to bring local residents together in a socially distanced way can share #ClapForVolunteers on social media or let their neighbours know about the event.

As for Hale and Woodgreen, the parishioners are already planning their next project – a Limerick competition!