I want to Volunteer

Search for opportunities in your community

Search our directory for Help & Support services in Hampshire

Community First's Help and Support Directory is an easy to use directory of local community services. It has been created to help people connect with support services and community groups where they live.

Our small but experienced board of directors decide our strategic direction. Our strategy is implemented by the Chief Executive and the Senior Management team.

It is governed by its articles of association (PDF, 600KB) and regulations made under the articles. A copy of the Company’s latest accounts can be downloaded  here (PDF, 1.6MB)

Community First is registered with the Charity Commission number 1147527. It is a Limited Company by guarantee number 08071971. 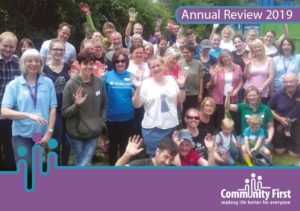 Beverley Morgan Jones has been a resident of East Hampshire (Alton) for the last 36 years.

Lived and worked in Hampshire since leaving college in Winchester. Trained as a teacher and taught in several schools in the county. Became a full-time youth and community worker and was the county officer for a large voluntary youth organisation covering Hampshire and the Isle of Wight.

Developed and managed the first community school in the county. Eventually moved into the world of adult learning and training.

Retired early as a vice principal of a large further and higher education college in north Hampshire and then helped develop the adult and training services of Hampshire County Council over a nine-year period.

Because of my background I have a good understanding and knowledge of the voluntary community sector and its interface with various statutory organisations in Hampshire.

Until recently I was a board member of an international adult and community learning organisation, chairman of the North Hampshire bench of magistrates and the Prince’s Trust in Hampshire.

I became associated with Community First East Hampshire some 6 years ago and took a lead role in merging the organisations that work with Havant and Winchester to form Communities First Wessex (trading as Community First).

Now fully retired I spend my time on travelling and the further development and growth of Communities First Wessex. I hold a Master’s Degree in Business and Administration.

Trevor has a BA in Economics and History.

His career has involved developing and implementing large-scale IT systems solutions across a wide range of industries. Company director for thirty years, including roles as MD, CEO and Chair.

His wide range of experience and skills include General Management, Change Management, Sales and Marketing, Tendering for Contracts, Product and Service Development, Finance, HR, Consultancy, Project Management, Mergers and Acquisitions. He has worked in the voluntary sector for seven years, including being Chair of a CVS, Winchester Area Community Action, now part of Community First. He is used to working at senior level with local authorities.

Trevor's other interests include being Vice-Chair of Home-Start Winchester and District. He enjoys hill walking, theatre, literature, art, watching rugby and cricket.

He says: "I believe that with austerity budgets and funding cuts to many services, charities, local authorities and individuals must join together to mobilise resources to mitigate the impact of these cuts on those in most need in our society. I am very pleased to be a part of Community First which, as the CVS for around 40% of Hampshire, is locally at the forefront of this activity."

Fellow of The Chartered Institute of Bankers

I have over 45 years in International and Merchant Banking culminating in Board and Executive positions in London and the Channel Islands.

I have been involved in the voluntary sector all my adult life. Voluntary Youth Club Leader for 20 years. Spent a few years as business advisor in the Princes Trust and as a Magistrate in London and latterly in Southampton. Many years involved with expanding a Community Transport Scheme in London where I was Deputy Chair. On relocating to the New Forest twelve years ago became Trustee/Director of Community First New Forest. Also involved in The Friends of Brockenhurst and Brockenhurst Care Cars.

John is an experienced non-executive chairman, director and board advisor, with a focus on strategy, performance, effectiveness, governance, and Merger Acquisition integration.

He was a Trustee and Chair with Hart Voluntary Action for 10 years and Chair of the Well Being Centre in Frimley. Additionally John served as a stakeholder Governor at Frimley Health NHS Foundation Trust.

After a brief spell as a teacher, Denis joined the NHS as a graduate management trainee, working initially in Birmingham and training at Manchester Business School. His early NHS career was spent in the West Midlands where he developed an interest in human resources management.

He was appointed HR Director at Board-level in three different hospital and community organisations in Devon and Hampshire during the 1980s and 1990s. His last hospital role was at Southampton University Hospitals Trust as its HR Director between 1992 and 2001.

During the last 6 years of his NHS career Denis was Workforce Director for the NHS in Hampshire and the Isle of Wight accountable for the strategic planning of the healthcare workforce (30,000 people) and he had responsibility for education budgets of more than £100M.

He left the NHS in 2007 to set up Gibson HR Consulting Ltd. He works as an independent consultant and interim manager with NHS employers across the south of England.

His experience includes senior management at Board level in NHS employing authorities and specialist management in human resources, education and training.

Denis' other interests include travel and music. He sings with the Winchester Community Choir that raises money for Hampshire charities and is learning classical guitar again after a long break…

B. Phil in Education

I qualified as a teacher and youth worker and initially worked for 12 years in Rutland and Leicestershire as a youth and community tutor/teacher based at a Community College. In 1985, I moved to Andover, Hampshire, and worked for a further 26 years as a Community Education Manager based at a Community School to manage locally based adult learning, youth work, extended services and community education. For the 10 years before retirement, in 2010, I also managed the community based Andover Adult and Family Learning provision which was initially funded through a sizeable European Social Fund grant. The provision made a significant contribution to engage “hard to reach” families and adults in learning whether to improve their literacy and numeracy skills and/or to take steps to return to learning to gain new qualifications. A dedicated Information and Advice Service was externally funded to support many of the learners to return to work. The provision was an excellent example of inter-agency collaboration and partnership working both with the voluntary and statutory sectors.

I am a keen mountain/hill walker and still enjoy an airy rock scramble on a sunny day.

During my career I progressed from Management Trainee to Personnel Director in Engineering, Electronics, Computing/IT and Banking.

I have considerable in depth experience of HR line management, employee relations, strategy development and implementation.
Plus management of large business areas related to HR/Personnel.
Since retiring have gained experience as a trustee of two charities including Joint Chair and Treasurer and acting as the main fund raiser for one charity.
I believe I have a wide range of skills and competences gained over a long career.

I am also a trustee of Wheels for Freedom

I did my degree in Spanish and French, but then decided to train in Social Work - first of all in Leeds and then at the London School of Economics.

My first job was in Hertfordshire as a member of a small team working across the County on the prevention of homelessness and the rehabilitation of homeless families. Our small department was subsequently absorbed into the Childrens' dept, and I worked in Watford, mainly on a huge overspill LCC Housing estate. I then moved to South Wales to manage the Children's services in the Bridgend area, and was later to Port Talbot. After 10 years in S Wales I moved to Havant, where I was Area Manager for Social Services for 13 years, and came to know Leigh Park, Warrren Park, and Wecock Farm and their problems quite well!

I left that post when the department was reorganised, and joined the Shaw Trust, a voluntary organisation, placing people with disabilities in work and supporting them in their employment.

Her other interests include Healthwatch and Winchester Rotary.

Keep notified on what's going on